Saved A Life on 2nd Day on Water as a First Time Boat Owner!

gbchriste Member Posts: 7 ✭
July 2016 edited July 2016 in General Discussions on Hurricane Deck Boats
I'm a first time boat owner, having acquired my new Hurricane Sundeck Sport 188 just last week. I had only owned the boat for three days and we were out on the water for our second outing, zipping along down Northwest Florida's Santa Rosa Sound when we came up on a capsized kayak, 2 people in the water. At first all looked OK and I maneuvered to pass well to port of them. But as we were passing we could see one of the individuals was struggling to barely hang on to the kayak and was repeatedly slipping under the water and weakly waving an arm.

By the time I swung around and pulled up he was face down and limp in the water without a life jacket. My son grabbed the throwable, jumped in after him, got him on the float with his face out of the water, and started pulling him back to my boat. I then jumped in to lend a hand and we got him to the back of my boat. One of my party broke out a couple of type II PFDs and passed them down to us and we got one one him and us so we were all stable and safe. Our victim coughed up a little water and was breathing OK but he was clearly very intoxicated and barely conscious and coherent. A couple of jet skiers then showed up to help and one jumped in to help us hold our guy while the other one got the second kayaker out of the water.

As we floated there hanging on to my boarding ladder my wife called 911 and they dispatched the Coast Guard from Destin station. Our guy was slowly coming around and after bobbing around for about 15 minutes we floated him around to the front boarding ladder and with assistance from those on deck were able get him up the ladder and resting on the front swim platform, and then eventually sitting up and talking. By the time the Coast Guard arrived the crisis had passed and the situation seemed well in hand. They took some names and numbers and asked the kayakers if they had life jackets, which they didn't. Surprisingly the CG response was, "Get some" and then they departed back to base.

The kayakers had put out from the beach behind their nearby condo so we motored them over with the kayak in tow behind a jet ski and dropped them off. By then he was able to disembark and walk under his own steam. I'm sure I'll have lots of interesting stories and memories as a boat owner but I doubt I'll be able to top that one.

Here's a photo of the entire crew involved after we got them back to the beach.  The rescued drowner is the guy second from the left.  That's my son Phil to his right and I'm next to Phil.  Phil was the real hero of the day.  When we pulled up he didn't think twice or hesitate at going in the water to help the victim. Good thing too because this guy would have been dead in another 30 - 60 seconds.  His companion who was in the water with him is giving the thumbs up.  The folks in the vests are the jet skiers that joined the rescue, and the rest are the party from my boat.  They were all great.  No one panicked.  They stayed in control.  They listened to and followed my directions.  And effectively helped when directed and where they could. 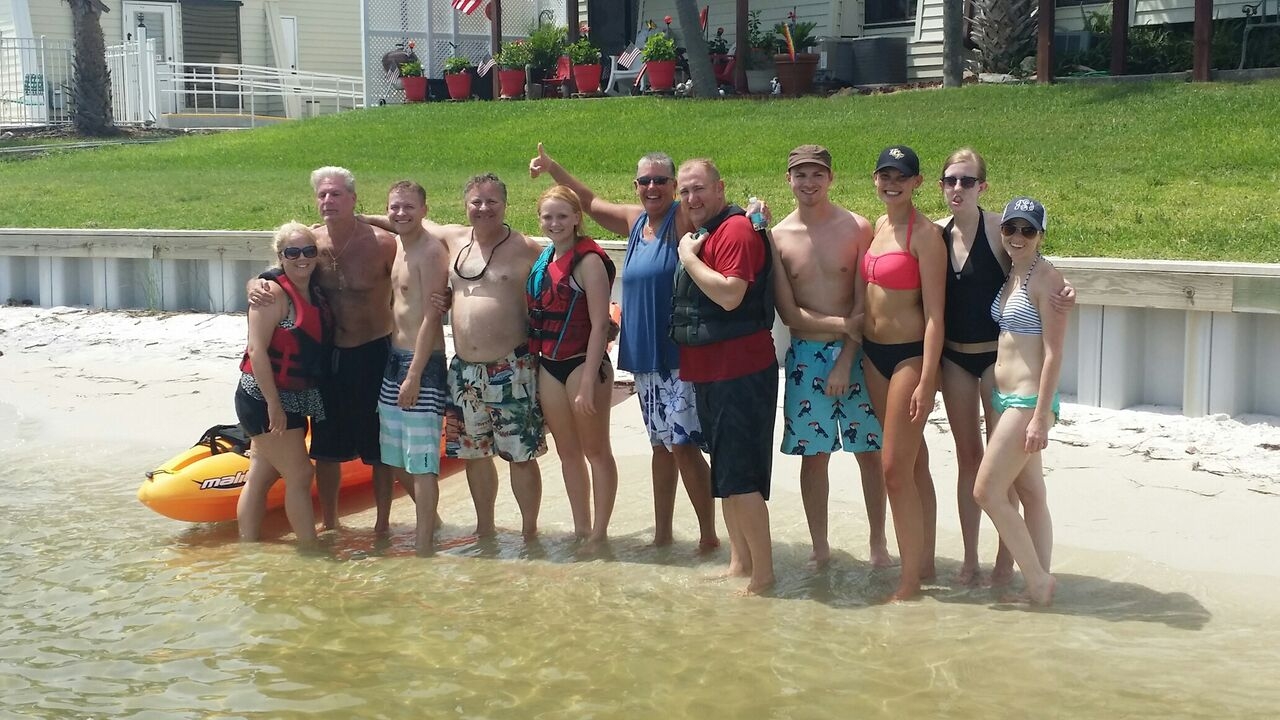