sdhurricane USAMember Posts: 8 ✭
April 15 edited April 15 in Electrical System Discussions for Hurricane Deck Boats
I am making some upgrades to my SD 187 to include an Blue Sea ACR, Blue Sea 4-post battery SW, a NOCO 2X charger, along with 2 Optima D34M (Dual start/deep) batteries.  A wise person once told me that "if ain't broke..." You know how that goes.

My thoughts are - what worked for the previous owner does not work for me. Therefore, I decided to "update" some of which appeared to be on its way out and to address some changes with how the boat will perform, on the water and while docked.

Some info about the current setup (in case you cannot read what's on the tape) - I am upgrading from 2 Centennial D24MF that were switched by a Guest SW/without AFD.   A 15A pop breaker was hooked up to connect to the switch panel(s).  I fabricated a nice little Seaboard mount on the inside of the transom (24"Lx10"H).  I also installed a NOCO battery port to be able to connect shore power to without having to worry about running power cord outside of the hatch.

At this point I am just trying to determine the wire gauge for all endpoints as well as the associated fuse ratings.  I have a Yamaha F115 which has a 35 amp alternator from the motor.  I've added a couple of new electronics components, one of which being a stereo 1000W amp (or so they say) as well as a Simrad Cruise 7 & chartplotter.  The latter doesn't pull much but might over a long period of time.  So I set out upgrade a few things to compensate for my compensation

I plan to use 4 AWG throughout, and use 40 AMP ANL fuses at the ACR>Batts

I have attached an image of a nominal setup with painters tape to identify what I'm connecting as well as gauged wire/Fuses.   I'd link t0 apologize for the absence of a true wire scheme.  I probably could have whipped something up in MS Paint or CAD but I figured this would do.

If you guys have any experience with doing something similar on your boat please let me know your thought and opinions.  I've researched and have come to the conclusion that there are a more blowhards out there that are "master boat electricians" as well as DIY'rs that just want electricity to be magical for them.

Any thought would greatly be appreciated.  Thanks. 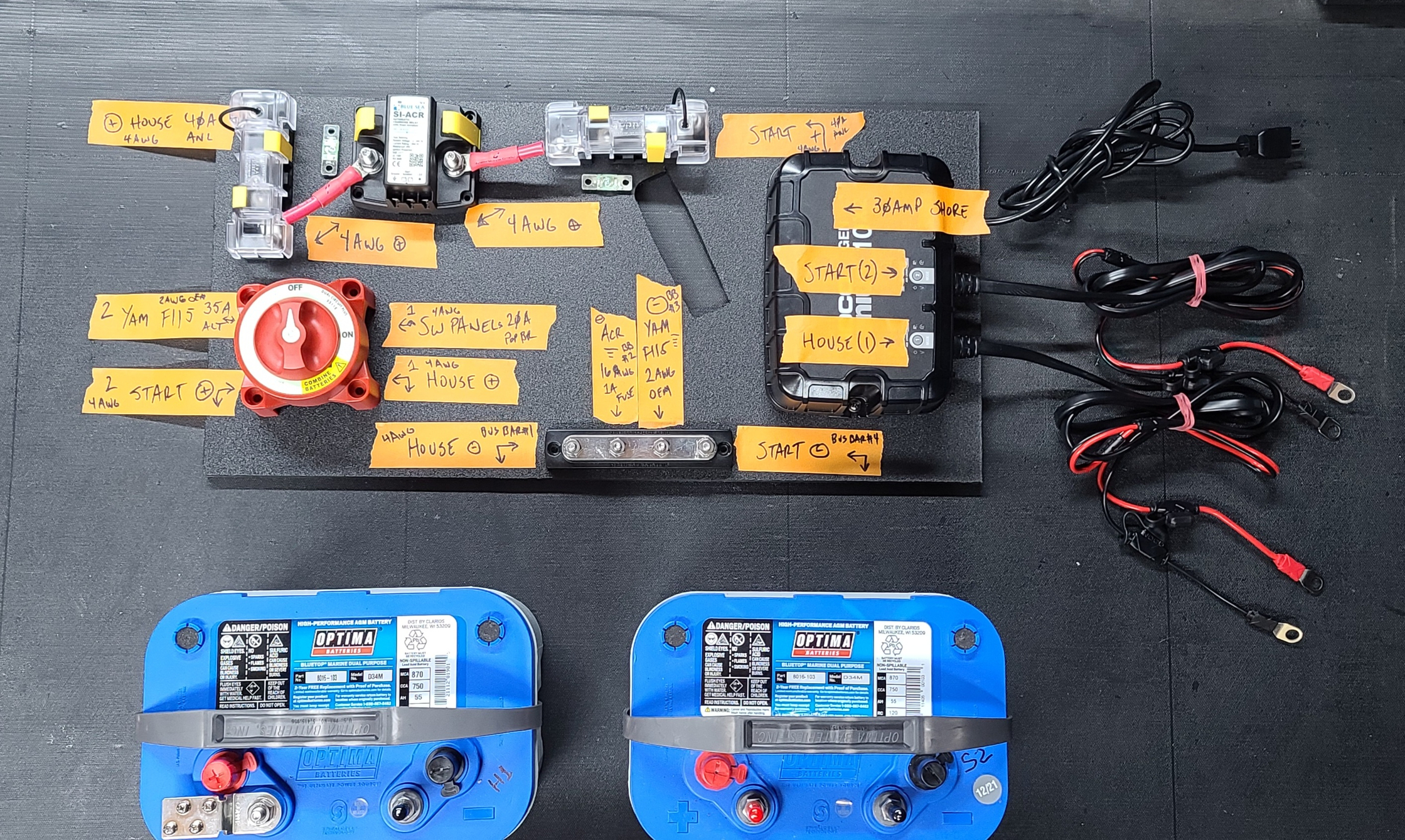